An inflated number of voluntary and community organisations find themselves dependant now more than ever in recession on funding from individuals. In the profitable online sphere, the volume of potential donors for which these VCOs are competing appears to be slowly dwindling. This trend, compounded with the loyalty of individual donors in recession places the relationship between the individual and the VCO at the heart of third sector fundraising. Social media is ‘relationship media’, and as such it has a natural and vital role to play here; but by social media’s special nature, its importance to third sector fundraising in a recession has commercial implications for the digital agency with third sector clients. 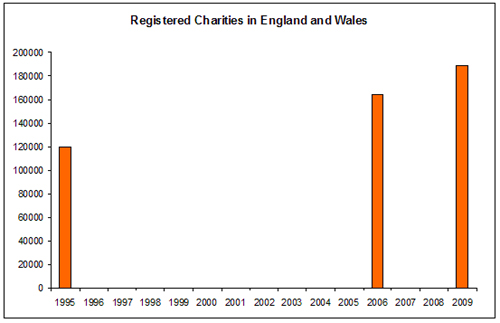 The main sources of income for VCOs can be identified by four categories. These are government funding, corporate funding, funding from investments and legacies, and funding from individuals.

It is an abundance of government funding that has grown the third sector in recent years, but we find ourselves now in a recession, in which this source of income for VCOs, as well as another two out of the main four, is in decline.

In recession, the budgets of both central and local governments are pressurized and funding for (both private and) third sector service initiatives is cut. Similarly, corporate funding dries up, as smaller corporate profits, which are related to economic performance, result in a reduction in corporate giving. Investment and legacy income also begins to decline, as assets (equities, bank deposits, and property) become less valuable and susceptible to lower interest rates.4

We have a situation now, in recession, then, where an increasing number of competing charities are left increasingly at the mercy of the fourth and final category of income: funding from individuals.

Examining the UK market for online donation, and even, more generally, examining UK online interest in charities, however, uncovers some worrying trends. As the following graph shows, interest on Google in the search terms charity or sponsor or donation or “online donation” in the UK has declined consistently year-on-year since 2005. 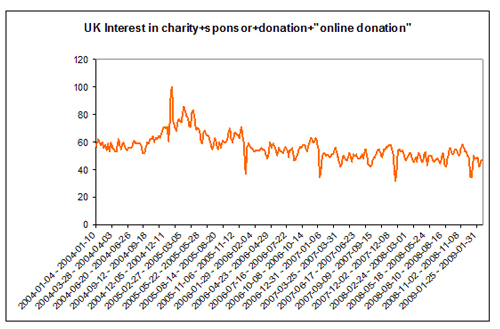 One might suggest that perhaps VCO brands, rather than generic terms, have grown in the online space since 2005, but looking at the entire charitable and non-profits category of Google searches, which includes brand terms, a similar trend is revealed: consistent decline year-on-year since 2005.6 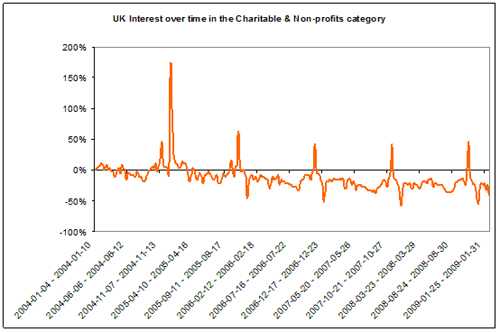 We can conclude from these trends of decline in online interest in donation and charities that the base level volume of online donation from individuals is declining. It is important, then, for VCOs in their online fundraising efforts to attempt to secure higher value or repeat donation from the same individuals.

The pressure to achieve this is compounded by the current climate of recession. Evidence from other recessions is that individuals are less promiscuous with their giving during a downturn: they focus on causes that they already support.7

Moreover, with the growth of social media, there has come to be an expectation on the part of the individual of opportunities for dialogue with brands and product and service providers. Not to fulfil this expectation would be to jeopardise the strength of the relationship that exists between the organisation and the individual. Oliver Westmancott puts it simply: “If you present your content in a way that doesn’t make it easy for people to respond to they just won’t, they’ll engage with other issues and organisations.”8 Those “other issues and organisations” will be the ones that do provide a platform for dialogue.

Another effect the growth of social media has had on the attitudes of the individual is the trend, as Rachel Beer describes it, for people to use social media “to get the things they need from each other, rather than from traditional institutions like corporations”, or indeed VCOs.9 Increasingly, individuals value the opinions of other individuals more than those expressed by the organisation. Organisations should therefore seek to provide a platform on which individuals can be evangelists for the organisation’s cause.

Not only does social media then both facilitate and demand conversation, it can be used to strengthen relationships in other ways: through the opportunity for organisations to grant individuals privileges, such as membership of a community whose shared interest is the work of the organisation, and personalised information about the individual’s role in that work. These things add value to that which the potential donor gets in return for his or her donation.

Social media can be used to achieve specific goals in third sector fundraising. For one, it can allow organisations to connect donors with recipients. By demonstrating more vividly the impact of a donor's 'investment', this connection will reinforce and augment the value of donation in the mind of the donor.

Social media can also be used to improve transparency and legitimacy in an organisation's work. The communications that constitute a social media environment are by their nature “open and equitable, and require […] the transparent sharing of information, honest discussion of […] successes and failures, highs and lows – warts and all – rather than the polished diplomacy of PR, the hard sell of advertising or the push of marketing.”9 As well as rendering communications transparent, dialogue about the work of an organisation can also have the effect of democratising that organisation. It gives a donor the opportunity to question, criticise, and approve the work of the organisation. More to the point, it gives the organisation the opportunity to respond to those questions, and to act on that criticism or approval. A more transparent and legitimate organisation is a more attractive one to donors, and more attractive to donors means more likely to receive support.10

The Implications for the Digital Agency of the Value of Social Media
Social media then has a valuable role to play in third sector fundraising, especially during recession when the relationship between the VCO and the individual is paramount. Apart from anything else, the expectation on the part of the individual of opportunity for dialogue with the organisation, and the need on the part of the organisation to provide a platform for individuals to be evangelists, mean that VCOs cannot now afford not to invest in social media: they risk damaging their relationships with their donors if they do not.

Any agency that describes itself as a ‘full-service’ one must therefore be able to provide comprehensive social media services. Investment will be required in the agency’s capacity to provide these services, and in their marketing of them; at the same time though, these services should be increasingly easy to sell to third sector clients.

That said, when it comes to selling social media services, agencies will still have to consider carefully how they’re going to prove the return on investment in social media to their clients. Some forms of social media, exemplified by the Dogs Trust’s Facebook application (http://apps.facebook.com/dogstrust/), promote direct donation, and there are opportunities to monetise social media and track the revenue it generates. An organisation can turn social media content into advertising inventory, and it would be easy to put tracked links to donation pages in a twitter feed, for example. However social media is not particularly suited to this kind of advertising. As has been discussed, it is honest conversational communication; and sales (or even fundraising) is not generally at home with honest conversation, or at least not with the honest conversation that is conducted between individuals. It would in most cases be a counter-productive misuse of social media to attempt to advertise with it.

One solution to the problem for the agency of proving return on investment in social media, when that return is rarely direct, is for the agency to establish with the client more qualitative objectives and measures of success for social media investment. All VCOs value their relationships with individual donors. Success with social media can therefore be attributed where it leads organisations to “build better relationships”, to “participate in conversations where” they “hadn’t previously had a voice”, and to “move from a running monologue to a meaningful dialogue” with potential donors.11 These successes all involve participation on the part of the organisation; the organisation will know for itself when they have been achieved. When asked, “How successful has it [social media, specifically twitter] been in terms of raising awareness, attracting donations and finding homes for dogs?” Alex Goldstein of Dogs Trust responded:

The answer to this all depends on how you measure success. To us, it’s been very valuable. People are increasingly coming to us for advice on obtaining or caring for dogs and we’re able to give that or direct them to where they can find it; that’s certainly part of our job description.

We are also able to build enthusiasm in new supporters who hadn’t heard of us before. And, best of all, we were able to rehome a dog.12
Goldstein recognises Dogs Trust’s success here, because, in the way success was measured, he was part of it.

It’s not surprising that the measurement of success with social media is linked to the client’s participation in it. Unlike the views and clicks of advertising media, social media is not a commodity in which the digital agency can deal. It's an activity, that clients need to be enabled in, and need to learn to perform for themselves. True dialogue, connection, transparency, and legitimacy cannot be held or made or achieved by proxy. Digital agencies will need to educate and to enable clients in the practices of social media, so that, contrary to the nature of ‘agency’, clients can participate in it for themselves.

What’s more, regardless of how good a teacher the agency is, clients will always be good pupils to varying degrees. Social media services provided by the agency are related to the abilities of the client. If the digital agency is to deliver quality, then it should be prepared to have to work with clients for as long, and only for as long, as it takes in order for them to become proficient. This has the potential to make billings for social media services unpredictable. Agencies might want to attempt to charge minimum fees for each social media goal, but when social media goals are qualitative as has been discussed, they can be difficult to define in contractual terms.

Most of all, since social media services are an education, and a process of enabling, while finite in billings, they are virtually infinite in value to the client. They must therefore be charged out to the client at a premium: at a cost that represents their value to the client over time. This premium – or investment, as it should be seen – needs to be justified to the client in an agency’s marketing and pitch activities: education, therefore, begins from step one.

Like any business, VCOs will be feeling the pressures of the economic recession. Online fundraising from individuals will be important to them, and less than ever before can they afford to burn bridges with potential donors. Maintaining and building on existing relationships, keeping people donating and donating more – these are the tactics not only for survival but for success. Social media has a valuable role to play in relationship management, and indeed a vital one, as individuals are coming to expect and rely on the communications that form social media; it must therefore be integral to third sector communications strategy. The agency will need to educate at every step of its providing social media services: with its marketing of the services to prospective clients, with the establishing of objectives, and with the provision of social media services themselves.